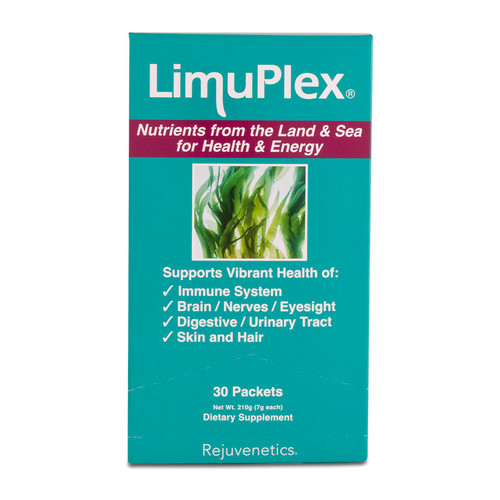 This whole food complex with powerful phytonutrients can help support the major body systems: immune, cardiovascular, endocrine, neurological, intestinal, and muscular-skeletal. Since our systems are inter-dependent, the adverse health of one system can negatively affect the others. By providing the key nutrients that balance and support the major systems, your body has the tools for optimal health.

It's the most dense antioxidant formula in the world!
A whole food complex with 500 carefully sourced compounds, provides the necessary health-rejuvenating benefits that your body's systems rely on.

In the age of “super bugs” and stress-related illness, a healthy immune system has never been more important.

People of the South Pacific have been consuming Limu (Brown Seaweed) for centuries and attribute their longevity and good health to this sea vegetable. Science has verified their folklore. Limu is a storehouse of vitamins, minerals, detoxifiers and glyconutrients. One of the most important recent discoveries, fucoidan, is an extraordinary immune enhancer.

Colostrum; Nature's First Food. All mammals create colostrum when they give birth. This “mother's milk” contains the mothers immune history, providing the newborn with immune protection immediately upon nursing. Colostrum also contains growth factors which are key nutrients essential for growth, regeneration and repair of the body.

Science has verified that the immune and growth factors are bio-available to humans who consume first milking whole bovine colostrum.

Stress, poor diet and sedentary lifestyles are common today. It’s no wonder why heart disease remains the number one killer. Obviously, positive lifestyle changes can help reverse the problems, but nature has created a cavalry to come to the rescue, antioxidants. LimuPlex contains a variety of antioxidants, each playing a key role in cardiovascular health. Grape skin and grape seed extracts are a rich source of powerful Polyphenols, Resveratrol and Anthocyanins. Along with these extracts, LimuPlex contains Cranberry and Elderberry, which provide additional antioxidants. Antioxidants neutralize free radicals, the main cause of cellular and organ damage.

Stomach ailments are among the top complaints from patient to doctor. Over 70% of the immune system resides in the gastrointestinal tract. The immune components of LimuPlex alone are a tremendous aid to gastrointestinal and urinary tract health. IGF in colostrum promotes normal gastrointestinal function as does Fucoidan, Cranberry and Elderberry.

Mood, memory and clear mental focus, these are all functions of your neurological system. In 1996, researchers discovered that 8 Essential Sugars called Glyconutrients were responsible in part for normal cell-to-cell communication. LimuPlex is one of the few food sources for all 8 Essential Glyconutrients. The effect: improved mood, mental clarity and focus.

LimuPlex is a delicious Berry flavored drink. Pour one scoop of the powder into a glass, add water and watch the lightly effervescent bubbles go to work. They release the isotonic/electrolyte delivery system used in sports drinks to rapidly assimilate the nutrients into the blood stream. LimuPlex is free of preservatives, additives, artificial colors and flavors. LimuPlex is sweetened with Lo Han Kuo, a nutrient dense Chinese fruit.

How can one product do so many wonderful things? Nature provides the answer. By utilizing the whole foods found in nature, and by concentrating the most powerful components and combining them in the proper amounts, we achieve a compounding effect. Every serving of LimuPlex is designed to allow optimum absorption. LimuPlex contains:

This natural red-orange carotenoid which originates from the red microalgae is the most potent antioxidant known. Among other things it helps support a healthy heart, sugar metabolism, vision, fights irritation and helps the skin defend itself against the sun. Astaxanthin is not only the most potent, but also one of the few antioxidants capable of crossing the blood-brain barrier. This allows it to support a healthy memory by scavenging free radicals inside the brain that might otherwise damage neural structures.

A powerful antioxidant polyphenol normally found in nature, most notably in red wine. However it is not so much the antioxidant properties of resveratrol that are responsible for its proven health benefits, it is rather resveratrol’s ability to activate the Sirtuin1 gene that protects the cardiovascular system, maintains neurocognitive function and helps extend the lifespan etc. Most of the resveratrol that can commonly be purchased in health food stores originates from the root of an Asian plant known as Polygonum Cuspidatum. However this form of resveratrol is only somewhat similar to the one found in red wine, less concentrated and less effective. Rejuvenetics uses Resvida™, the highest and purest form of resveratrol from Europe, which consists of the exact same resveratrol molecule that can be found in red wine.

Zeolites are minerals that are formed in volcanic eruptions, appearing in nature as a result of the chemical reaction between volcanic glass and saline water. Zeolites have large open spaces or cages in their structures that form channels. These channels allow the easy movement of ions and molecules into and out of the structure. Zeolites are also one of the few negatively charged minerals found in nature. The natural properties of zeolites allow them to attract to themselves and trap within themselves positively charged atoms, ions, and compounds, and can remove them from a system. The natural zeolite ‘clinoptilolite’ is used in LimuPlex. This particular zeolite has been used for over 800 years in traditional medicine to improve general health in places like India, China, Japan, Russia, and all throughout Asia. In the United States this zeolite has been used in water filtration, air purification, animal feed and even in fertilizers to keep crops healthy. Today, clinoptilolite is being used as a dietary supplement, primarily for human detoxification.

Be Healthy!
Take LimuPlex first thing in the morning, and always on an empty stomach. You'll begin to notice the benefits quickly. Everyone is unique, and LimuPlex will go to work on wherever your body needs it most. Benefits reported include: